Hi again.  This is part 2 in TrackMan Performance Putting.  In part 1 we discussed things like Skid & Effective Stimp.  Today we are going to be trying to answer a question.  The question is simple “Will I make the putt?”  At first glance, the question seems to be a simple yes or no answer based solely on belief in oneself combined with true or implied putting skill.  I would agree answering this question with a resounding yes is foundational to shaping a positive attitude when putting.  The question aims more to answer “How much can I miss and still make the putt from any given distance?”  This question is much more precise and requires physics and TrackMan Putting to answer. 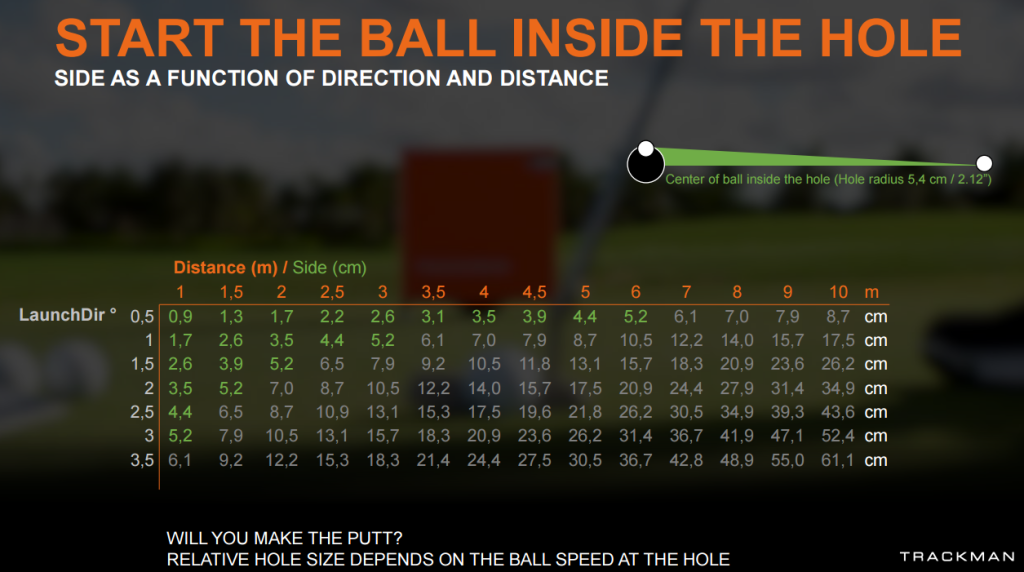 Pictured above is a chart and laid out it provides numerous data points.  On the far left, vertically from top to bottom, we have Launch Direction.  This is measured in degrees from the center of the hole (target line).  If you are familiar with TrackMan ball data, Launch Direction will look familiar.  On the top axis, from left to right is Distance.  Distance is the total distance a putting travels in a straight line from the starting to end point.  Lastly, we have the data contained within the chart.  These numbers are laid out in green and gray lettering.  The green lettering at each distance shows given a specific Launch Direction (Launch Direction in putting is almost 100% influenced by where the face is pointing), how far offline (to the side) the ball would travel and that your margin for error is still within the margin to make the putt.  The grey lettering at each distance shows the Launch Direction you would have to have in order to be outside the margin of error to make the putt.  This chart in essence is showing where your margin of error is on a straight, 10 foot putt where you would still make the putt.  Two things to consider with this chart.  1st, is its in centimeters (not inches).  2nd, the relative hole size at point of capture gets smaller the faster the ball is traveling.  To phrase this another way, the speed of the putt when it reaches the hole determines how much of the hole you can actually use to make the putt.