I introduced TrackMan putting in a previous tip and would like to go over some of the basic data.  This data is considered 1st generation data, meaning the data points chronologically align with the release of TrackMan putting.  Given TrackMan’s history and having had a unit for almost 5 years now, this type of verbage normally indicates more data points are in the future and they’ll be released only when they’ve been perfected in measuring.

TrackMan Performance Putting is broken down into 3 factors; Green Reading, Ball Starting Direction & Distance.  Each have specific categories within them that contain data points beneficial to improving your putting.  We will be discussing the data points in which TrackMan putting measures that assist and even improve a player’s ability to read the green.

The factors in green reading which TrackMan measures are; Skid Details, The path of the entire putt, Total Break, Effective Stimp.  Lets examine a few of these.

Skid.  Skid is the distance the ball is bouncing/sliding with a steeper deceleration profile before it starts rolling with constant deceleration.  Skid is something we’ve all heard about and in the past was mostly measured by setting up a camera face on and replaying the footage in slow motion to see about how long the ball skid.  This variable is important because a ball which skids too little might miss short and a ball which skids too much might miss long, even if the putts have the same ball speed.  So far, I have seen scenarios where putts have the same exact pall speed yet one misses short and the other long strictly due to skid. 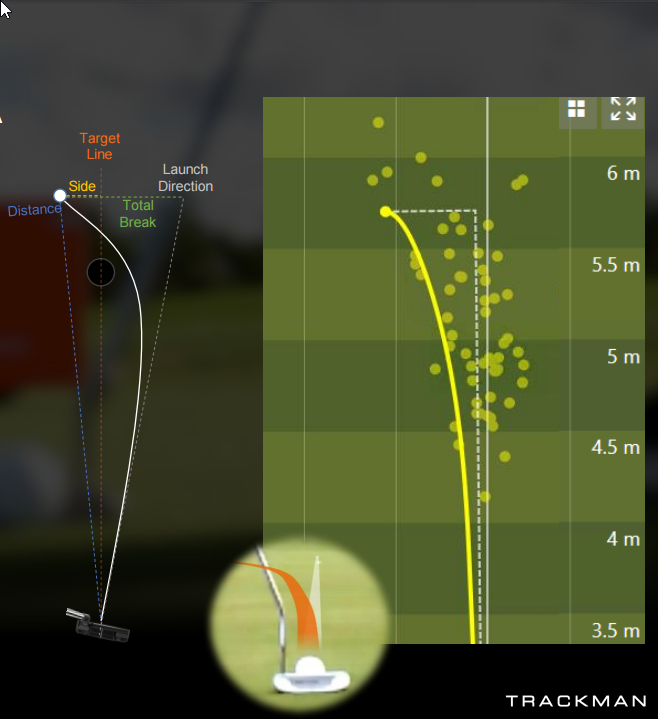 al Break is the total side movement from the ball’s launch direction perpendicular to the target line.

If you notice from the diagram, the total break is measure from the launch direction all the way over to the final resting place of the golf ball.

Lastly in part 1, we will mention Stimp.  Previously, stimp was measured by hand using a tool.  Now, TrackMan can calculate the Effective Stimp which each putt you strike.  This can become extremely beneficial to the average player when striking putts using TrackMan as just like how far they might carry a wedge at any given altitude, being able to assign a feel to a specific stimp reading is going to radically shift putting skill over time.

This is an exciting time in Putting and I encourage everyone to come out and try TrackMan putting for themselves.  Stay tuned for part 2.