There is no hiding that putting great can lead to lower scores.  How good are PGA Professionals from various distances?  Am I going to three putt?  What are my chances of making a putt?

I recently have read the book “Every Shot Counts,” by Mark Broadie.  This book outlines the strokes gained statistics from Driving, Iron Play, Short Game and Putting.  The wealth of information and knowledge presented is quite overwhelming.  With TrackMan introducing putting as part of their measured data, I wanted to learn more about putting.  Shotlink, who partners with the PGA tour in providing all the statistical data for PGA Tour events, is the source of this information. 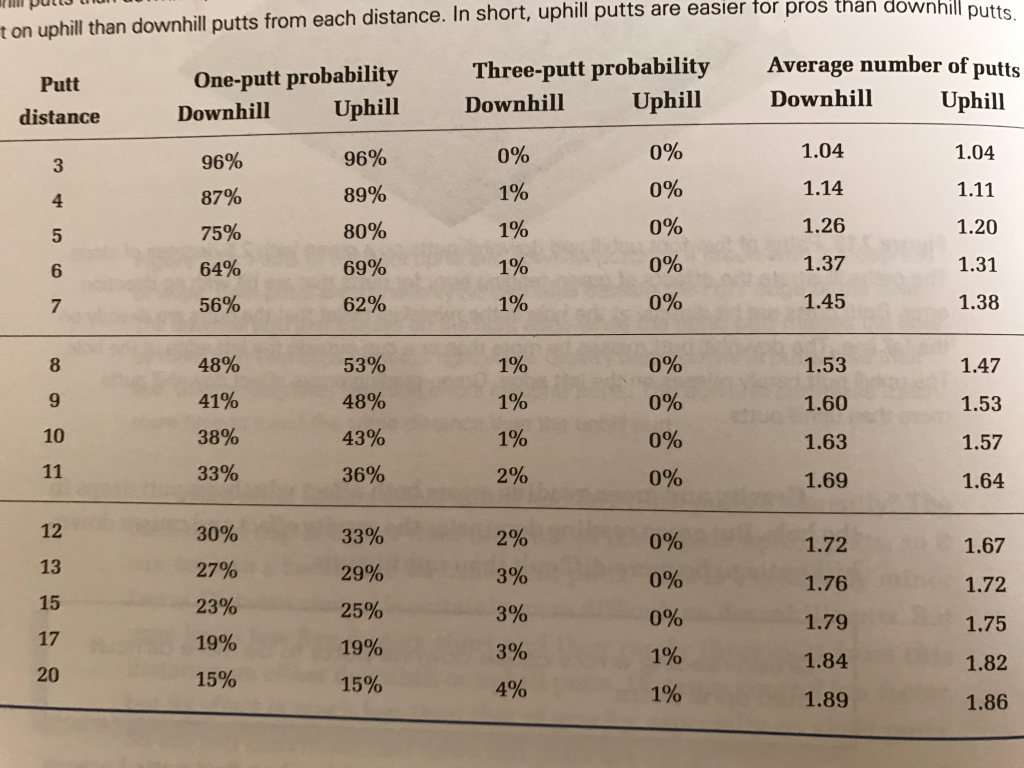 This chart I found to be one of the more telling in the book.  This chart outlines (PGA Tour player) the probabilities of a one putt, three putt and the average number of putts taken until holed from various distances.  A lot of the perception the general public has about putting I feel is slight skewed due to the nature of how golf is covered on TV.  More often than not, putts being made from all over the place what dominates highlight reels.

There are a few data points I’d like to focus on.  These probabilities are on green slopes between 1 and 2 percent (average 1.4 percent).  Uphill putts are defined as putts between 5 & 7 (on a clock) and downhill putts are defined as being between 11 & 1 (on a clock).  This assuming the middle of the clock is the hole and the clock is titled slightly from the top to bottom.  Understanding these data points will help you improve your putting.

Let’s look at one putt probability.  We’ve all said to ourselves, “I should make it from here.”  The averages of a 1 putt from a tour professional on both an uphill and downhill putt can give you an idea of what make percentages are from any given distance.  Notice from 10 feet, there is only a 43% chance a tour pro would 1 putt.  This does not mean the tour professional will not have days or weeks where they make 60% or even 70% of those 10 foot putts.  It simply means it’s an average.

The key point I’d like each and every one of you to take with you is simple.  Try and make every putt but be your own best friend and give yourself a break if you miss it.  Even the best players in the world miss putts from all different lengths and this demonstrates that.